I have been traveling in Europe for the last two weeks. So far my stops have been in York (UK), London, Copenhagen, Amsterdam, Paris and now I am in Berlin. It’s been great to go to the different cities and show people the SeaWind tenor, and let them hear it in action as I have done several performances. I went to some amazing saxophone shops as well and met a lot of great musicians, as well as catching up with some old friends. Well known saxophone stylist James Carter gave my tenor a good workout at Sax.co.uk in London and really liked it (I was surprised he admitted that because I think he endorses a rival company!). I played a concert in Denmark with 4 great women saxophonists including well-known Copenhagen musicians Pernille Bévort and Maria Faust. In London I did a show with a great local tenor player Dave O’Higgins, and even though Dave is a dyed in the wool Conn 10-M man, he had to admit the SeaWind was a pretty great axe. In Paris I played with the legendary drummer John Betsch, and halfway through the first set who should walk in but Rick Margitza! What a treat to have Rick join us for most of the second set. I have always loved his tenor playing and he was sounding better than ever. Looking forward to meeting with saxophone retailers in Berlin the next few days and playing Wed/Thurs night here. Then I’ll be heading back home to get ready for a cross-Canada tour with Laila Biali, a few Bridge Quartet gigs and a performance of my orchestral piece Changing Seasons in Saskatoon. I guess that’s all for now. Phil 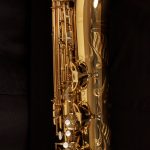 The Professional level Phil Dwyer Edition baritone saxophone is designed to give you everything you would want in a horn, and more. 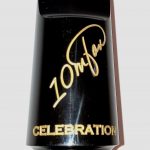