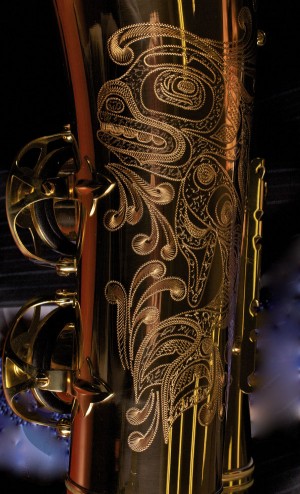 We are very pleased and fortunate to have award winning Aboriginal artist Jeremy Humpherville working with us. He has come up with a beautiful design called the “Songs of Nootka Sound”. We are limiting the number of saxophones that will be engraved with this design. Please read more about Jeremy at www.coastalcarvings.com.

The Songs of Nootka Sound

In July 2001, Luna appeared alone in Nootka Sound on the northern west coast of Vancouver Island.  At first Luna, like most wild killer whales, avoided boats and kept his distance from people.

But by the summer of 2002, word had spread about the killer whale in Nootka Sound, and boaters started to visit.  Luna nudged boats, spinning them around like toys, and bounced them up and down by pushing on their hulls.  Luna would spy-hop directly in front of boats to keep them from speeding away.

Killer whales are intensely social animals.  The boats and people provided the companionship and physical interaction that Luna normally would have received from his mother and from other whales.  He was interested in human beings for a social connection.  Luna wanted eye contact, he wanted physical contact.

Luna was encouraged to swim to the outer reaches of Nootka Sound, where he might encounter his own family and be reunited with them.  But unfortunately these attempts failed.  In 2006, his contact with humans would eventually lead to Luna’s passing – in Nootka Sound where he had lived for most of his life.  Luna went to visit and play with a tugboat he knew well; when he approached, he misjudged the powerful draw from the boat and was never seen again. 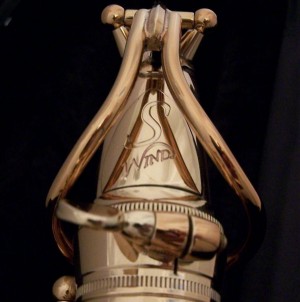 Killer whales’ vocalizations are the sounds they make to communicate.  In particular, the word “song” is used to describe the pattern of regular and predictable sounds made by whales in a way that is reminiscent of music.

To many, Luna’s songs were a call to his human friends, an expression of his desire for the contact to which he had become accustomed.  These songs and playful visits from the young Luna profoundly moved many during his time with us.  Likewise the smooth, rich, mellow and sometimes dark sounds of the saxophone reach deep into the soul invoking emotion with every note.  The story of Luna’s behavior inspired this design which adorns the Phil Dwyer Edition saxophones.  The imagery in this artwork echoes the killer whale Luna and the music that once flowed through the currents of Nootka Sound.