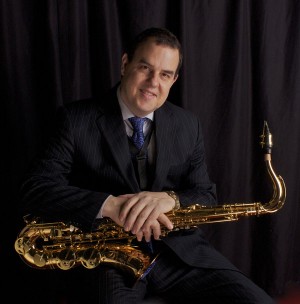 On Dec. 30, 2013 Phil Dwyer was appointed as a Member of the Order Of Canada. He was cited for “his contributions to jazz as a performer, composer and producer, and for increasing access to music education in his community.” In January 2015 he was recognized by the Royal Conservatory of Music as an Honorary Fellow. These distinctions come as Dwyer looks back at an illustrious thirty year career which has crossed stylistic and geographic borders and has included collaborations with a storied roster of great musical artists, including appearances on a dozen Juno Award-winning recordings.

Since his late teens Dwyer had been, to quote former Globe & Mail journalist Mark Miller “startling jazz audiences with his unprecedented command of both tenor saxophone and piano.” Phil grew up on Vancouver Island but left to seek out the action and excitement of New York City when he was just 17, moving there in fall of 1983. Over the next 18 months he opportunity to meet and ‘sit in’ with many of the true jazz legends who were still on the scene at that time and busking and playing sessions with many of the players who are the stars of today.

Phil lived in Toronto from 1988 to 2004. During that time his distinctive saxophone sound was featured on hundreds of recording sessions including Juno Award-winning albums with Hugh Fraser, Dave Young, Guido Basso, and Joe Sealy. He was a first-call sideman in concert halls and jazz clubs with artists such as Red Rodney, Tom Harrell, Randy Brecker, Gino Vannelli, Alain Caron, Don Thompson, Dave Young, Kenny Wheeler, Ingrid Jensen, Aretha Franklin, Natalie Cole, Boz Scaggs among others. During that time he also toured extensively in Canada and has appeared at major clubs and festivals in over 20 other countries.

Phil moved back to Vancouver Island in 2004, continuing to tour and record, appearing on Juno Award-winning releases by Don Thompson, Molly Johnson and Terry Clarke, and Diana Panton. In 2012 his orchestral jazz masterwork, Changing Seasons was the Juno Award winner for ‘best contemporary jazz recording’. From 2005-2014 he operated the Phil Dwyer Academy of Musical and Culinary Arts, combining his passions for great music and food. In the spring of 2017 Phil graduated from the University of New Brunswick with a degree in law and is currently working as an articling student near his Vancouver Island home.

Phil has been closely involved as a partner with SeaWind Musical Instruments from the beginning of the company and takes great pride in playing SeaWind saxophones exclusively in concert, and in the studio.

Read more about Phil at www.phildwyer.com.