Home / Education / How to lift solos (and actually learn something), part 1

The first in a 3-part series on transcribing (“lifting”) by our friend Pat MacGibbon.

WHEN I first started learning solos by ear, I assumed that if I simply played along with the original recordings often enough, I somehow would absorb everything that I needed to know and just magically would improve as a result. Sometime later, I realized that learning solos and playing them over and over again really only takes you so far in the learning process.
The same goes for many other things that we work on in the practice room. Common things like melodic patterns, diminished and whole tone licks, arpeggios, triads, scales, and all other kinds of similar ideas benefit you most if you engage with them at the higher levels of thinking.
What do I mean by that? Well, you know the musician who knows every Charlie Parker solo, but only ever plays Charlie Parker licks? He does that because he’s only ever processed that material at the lower levels of thinking. Compare him with the musician who has taken the time to deconstruct those same licks on a conceptual level and is able to play in the style of Charlie Parker without actually reproducing any of his exact licks.
This idea echoes the philosophy of jazz trumpeter Clark Terry as quoted at the beginning of this article. It’s also inspired by an educational theory called “Bloom’s Taxonomy,” which is far too in-depth for one little chapter, and far more complex than what I’m presenting to you here. However, if the idea of different levels of thinking intrigues you, then I recommend that you check out Bloom’s theory further.
For our purposes, I’ve broken the learning process down into three basic levels of thinking:
1.    Copycat
2.    Locate Your Lightbulb
3.    Adapt and Create
You need to go through all three levels of thinking if you want to learn an idea in a true and complete way. In fact, I would go so far as to say that anyone who learns anything truly and completely always goes through all three levels of thinking whether he’s intentional about it or not.
You can’t proceed to the higher levels until you’ve dealt with the lower levels, but it is possible to deal with the lower levels and then neglect to move on to the higher levels. That’s why it’s so important to understand how the process works. Sometimes you can progress through all three levels very quickly, so that you barely notice them, and other times it takes far longer. Regardless of how much time you spend on each stage, the process is always the same. It applies to learning things like jazz improvisation and composition, and it also applies to learning through-composed repertoire in a way that allows you to interpret it freely and masterfully. Let’s take a look at the first level.

Copycat
This level of thinking is all about learning and memorizing solos, licks, patterns, scales, songs, and ideas, and then reproducing them on your instrument, more or less verbatim. This is where you transcribe a solo and just focus on playing it as much like the original recording as possible. You’re not really doing anything creative at this level, you’re just building a basic level of competence with a new lick, pattern, scale, song, or idea.
Many musicians are reluctant to embrace this process, because they feel that it will hinder their creative development. Similarly, many teachers are reluctant to give their students licks, patterns, and written solos to play in improvisation situations for similar reasons.
“Copycat” sounds negative to people who have a strong creative drive, but it’s an essential part of the learning process. You don’t want to stay at this level, but the more thorough you are with it, the more success and freedom you’ll experience in the next two levels.
Read about the second and third levels of thinking in “How to lift solos (and actually learn something), part 2” and “How to lift solos (and actually learn something), part 3”! These posts are forthcoming and will be posted here on the SeaWind site shortly! 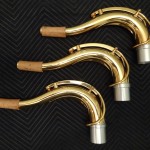 Proprietary alloy tenons (patent pending), allows for the saxophone to be more resonant and free blowing. Available in two sizes. 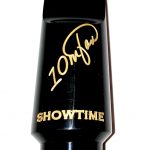